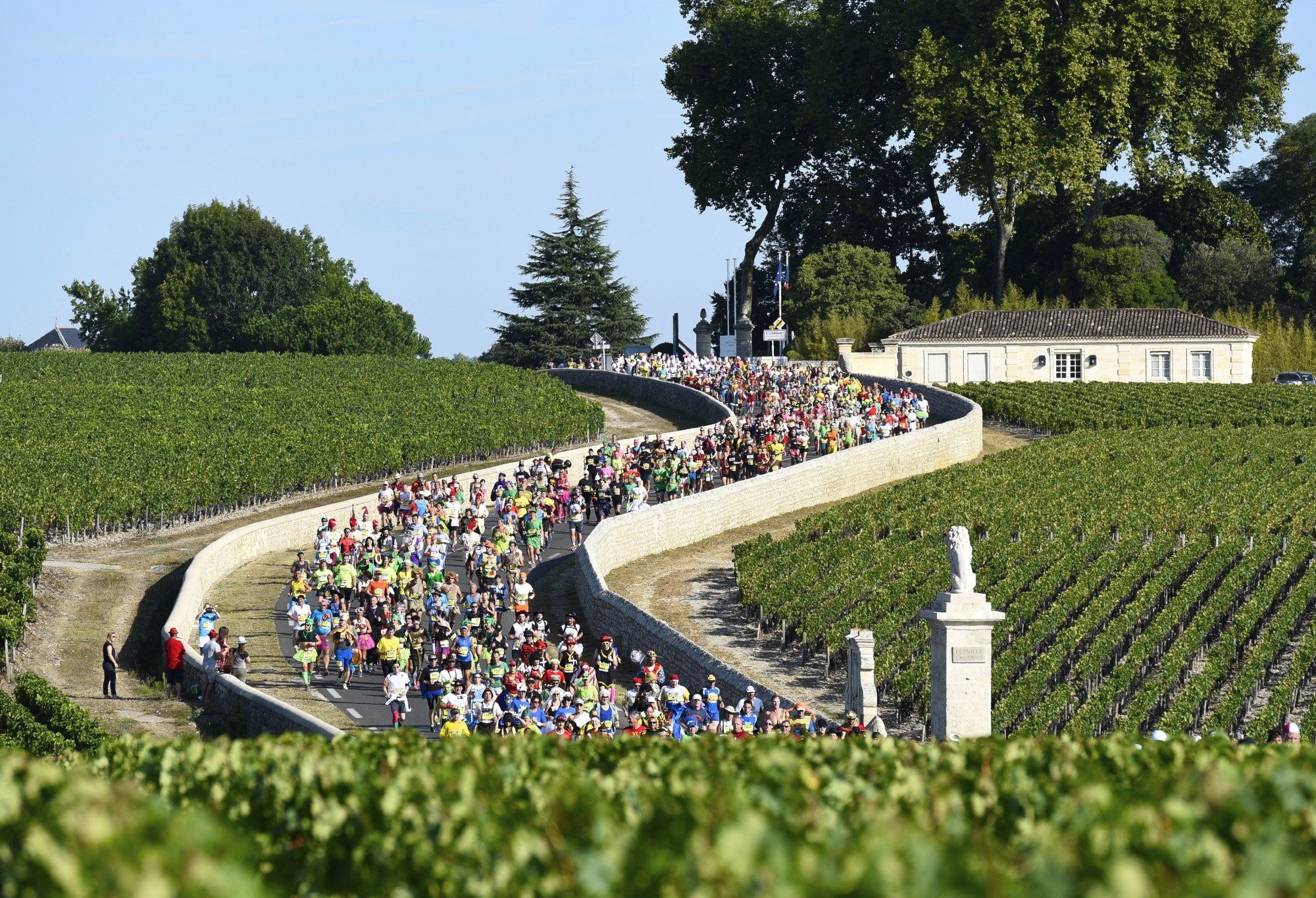 Have you ever considered running a marathon and drinking wine at the same time? If you have, Marathon du Médoc is the place to be! Arranged in Bordeaux, on the famous left bank of The Gironde, it is the most hilarious 42,2 kilometres in the world. People run in funny costumes, the route goes through iconic châteaux and vineyards, plus there is wine and music at every stand. During the last kilometres they even serve oysters and entrecôte…

Although I run througout the year here in Finland, wine was my main reason to participate. Being a wine professional who has never been to Bordeaux does not sound very convincing. So when Antoine Moueix offered me a chance to be the female runner in their team, I gladly accepted the challenge. And decided to start training well ahead (which never happened).

In fact, I buy my flights in the last possible minute, in the end of August, being well aware that my training period – despite three 32-kilometre runs in Helsinki – has started way too late, only 7 ½ weeks before the marathon.

No wonder some people suggest it would be better to start from a half-marathon. But I count on my basic fitness level and fly to France a day before September 10th. To be honest, I am much more worried about my injury inclined ankles than the potential of my lungs.

All those ambivalent feelings are washed away the moment my feet hit the streets of Bordeaux. I feel great, superhealthy and full of energy. Having spent most of the preceding two weeks without wine, we allow ourselves a glass of white, and later some red on the beach of Pauillac while eating meat to help our bodies to sleep well. The night is warm and mellow. Until the wind rises from Gironde. I can imagine how chilly it can be in winter.

After a nice sleep and some morning bread at Château Liversan, a beautiful castle nearby, I am one of the 8 500 runners standing at the start line at 9:30. The carnival atmosphere that surrounds us is something unbelievable. Something that you should experience once in a lifetime. No trace of stress or bloodthirsty competition. And thousands of Bordelais watching and clapping their hands.

A hot day awaits: the wind is gone and the forecast varies between 26 to 28 degrees. But I feel calm and confident, and decide to smile from the very beginning until the bitter end.

As a marathon rookie I stay sober as long as possible and concentrate on drinking water. It’s a real pity as many of the great châteaux (such as Lynch-Bages, Pichon-Longueville and Beychevelle) are located along the first 10 kilometres, which are chaotic, like in a rock concert. There are so many people that it’s impossible to run without becoming interrupted, and you also need to queue for water.

After 15 kilometres the crowd becomes thinner and I increase my speed (or so I think as I don’t have any plan or watch with me). Running feels stunning: I reach that flowing state where thoughts just keep coming in and out, where you breathe together with the universe. And I keep smiling until Lafite-Rotschild when the midday heat finally strikes me. Unlike many experienced runners who warned me about what happens after 33 kilometres, my personal inferno lasts from 26 to 29.

After reaching 30 everything is easy again. The greatest moment during the run happens at Phélan-Segur (34,5) where the DJ is playing a hit from my teenager years, Mory Kante’s Yeke Yeke, and people are dancing around. I realise I’m dying to have wine. But running feels so ecstatic that I just want to continue.

The next inferno comes at 39,5 where I finally have my first glass, something white I don’t remember because I am tired. The last kilometres are horrible: a direct road with no end in sight. You would think that being so close the destination is easy, but I can tell you: IT IS NOT.

When it’s over, I don’t feel tired. I just grab my medal and gift bottle and walk away after giving a short interview for a French TV channel. Some of the guys are already waiting in a restaurant nearby. The first thing we order is a bottle of champagne. Oh boy, Louis Roederer Brut has never tasted as delicious!

My final result is 5:00:10. With that I rank as 1 387th among those 7 669 who finished (ending up in the best 13 % among the females). For a first-timer with no training program, running plan or eating regime it is pretty decent, especially as Médoc Marathon is not famous for scoring records, and the weather was hot and completely windless. Also the first 9,75 kilometres in the middle of the crowds took me shocking 1 hour and 24 minutes, which made sure it was not possible to aim at four hours.

But as the evening goes by, those seconds irritate me more and more. Especially because I know who to blame for not running 4:59:59 or better: the entrecôte stand! How on earth did I think after 40 kilometres of running I would feel like swallowing meat in scorching heat?

Late at night I finally get into bed, tired but happy, thinking of sleeping until nine at least. But next morning I’m awake at 6:30, feeling energetic and not aching much. I quickly check my body: no injuries with nails, no abrasion (despite running in normal lace bra as I forgot to buy sporty ones). Just one tiny blister, that’s all.

In the afternoon we head to Marche des Quais, the Sunday market of Bordeaux. Those moments approach perfection: a post-marathon day in awesome sunshine and 37 degrees, enjoying un-iced (!) oysters and basic white wine in open air, with the guys who endured the same madness.

Having a stopover on my way back home, I decide to pop for a beer in Paris. After living in the city from mid-July to mid-August, I already miss it like hell. Of course the pint tastes so divine that for the first time ever, I nearly miss my homebound flight. When AY 874 departs from Charles de Gaulle at 19:00, the thermometer still shows 33 degrees.

Luckily our running day was the only below-thirty one during that week.

If you wish to read a completely different story on Médoc Marathon, this one from Guardian is hilarious!

My sincere thanks go to Antoine Moueix Propriétés. It was great to run in your team, even though I lost all of you guys after the first five kilometres. And thank you, Jean-Yves Saint-Céran, for arranging these press photos. The main photo is also credited to: AMCM/De Tienda/Mainguy.

Registration for the next race: in March 2017 (exact day is not disclosed in advance).